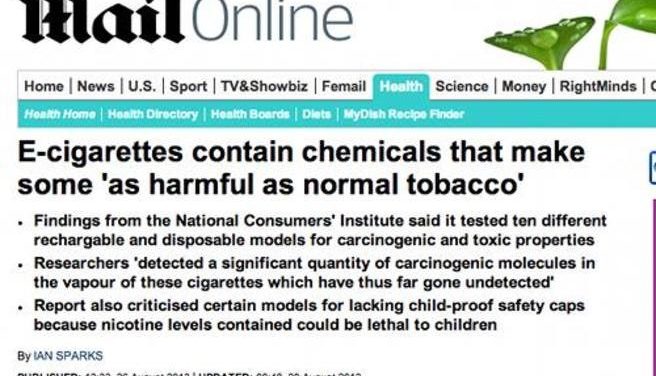 Why do the media portray E Cigs negatively?

In the last few years, electronic cigarettes have gone from being a curiosity and a fashion statement, to being recommended by doctors for those who are desperately trying to kick the harmful paper-and-tobacco habit. Yet accounts in the media of the surge of this new lifestyle phenomenon that’s increasingly being seen as a far healthier option to traditional smoking have been largely disdainful.

Why is this? Are the media accurately reporting reactions from official figures and bodies to the introduction and rapid rise of electronic cigarettes, including attempts to regulate the sale of the products? Or are they exhibiting a bias against this form of smoking (which actually is “vaping”, because e-cigarettes only emit harmless water vapour instead of the damaging cocktail of chemicals generated when people smoke tobacco leaves)?The various arms and branches of the media – in print, broadcast and digital incarnations – are not exactly known for their pure impartiality in many matters, and many, as we know all too well, are downright unbalanced in all sorts of coverage. It wouldn’t be the first time that editors got it wrong, and perhaps they’ll catch up to the facts at some stage. Or could it be that Big Tobacco feels imperilled by the huge popularity of e-cigarettes, and as their profits tumble there’s pressure on the press?

First let’s look at the facts, in so far as we can make them out. We know for sure that at least 2.1 million people, give or take, in the UK alone have kicked the dirty habit of smoking tobacco-leaf products and switched to electronic cigarettes. According to the NHS, there are 10 million former smokers in the UK, and a study last year by University College London showed that smoking in England is falling at such a rate that it's projected to dip below a record 20 percent of the population. The NHS itself, while not endorsing electronic cigarettes, lists vaping among a range of stop-smoking treatments that are proving effective.Backing up all that, a new and separate study by scientists at University College London examined nearly 6,000 smokers and found they stood a 60-percent better chance of stopping smoking if they used electronic cigarettes, compared to previous options such as nicotine patches or just going cold turkey. The university's epidemiology and public health department, which devised the study, said e-cigarettes "could substantially improve public health" as people stop smoking traditional tobacco products and become healthier as a result.A new survey in the United States entitled Physicians’ Attitudes and Use of E-Cigarettes as Cessation Devices found that of 128 doctors in North Carolina, more than half of them (67 percent) believed that e-cigarettes were more beneficial to their patients' health than tobacco products and 35 percent said they were recommending e-cig use to their patients who smoke and want to give up.

However, that hasn’t stopped the bureaucrats in Brussels from having their say. Earlier this year the European Union decided to regulate the sale of electronic cigarettes, and slapped a ban on advertising them in all member states starting around the middle of 2016. In addition to this, e-cigarettes will have to carry health warnings, using graphic images like those currently on tobacco-product packaging. E-cigarettes will also have to be designed so they cannot be used by a child.

So what does this mean for the ordinary smoker who wants to stop and perhaps change to electronic cigarettes?

Clearly, while there remains debate about the actual benefits per se of vaping instead of smoking, right now there exists actual advantages. Electronic cigarettes do not produce toxic smoke that’s inhaled by the smoker and does all manner of potentially lethal damage to their lungs and other body parts, and nearby people, places and clothing are not contaminated by those noxious plumes. Vaping, therefore, is not as rabidly antisocial as smoking has become, and because e-cigs are far cheaper than tobacco products, there’s more money for other things.

While currently the e-cigarette market in the UK and in other countries is not regulated, as governments study this new device, it pays to be astute in choosing what product or brand to start using. Today reputable e-cigarette firms exist in Britain that carefully select their e liquid ingredients and vaping hardware so that they – and their customers – know what they’re getting. It’s worthwhile doing some research, chiefly by visiting e-cigarette firms’ websites, and see what they’re telling you, or not.

If you’re still trying to decide whether you should switch to or take up vaping, as with all matters related to health, it almost always pays to listen to the professionals and not the official meddlers or media howlers. There’s plenty of information, and increasing numbers of studies and surveys, to strongly suggest that electronic cigarettes are by far the better option.