Now "e-cig" and "vape" Make It Into the Oxford Dictionary! 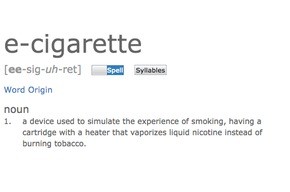 Smoking has long been known as a contributory factor in numerous health concerns, so many people welcomed the smoking ban when it came into force in the UK in July 2007. One big positive of the act was that many smokers chose to swap to alternative smoking methods to try and circumvent the ban and the rise in popularity of electronic cigarettes has been increasing ever since. Electronic cigarettes went from being a relatively unknown alternative to traditional cigarettes to a mainstream product.

A sure sign that the devices are here to stay is that the terms ‘vape’ and ‘e-cig’ have now been added to the Oxford Dictionary, showing that they have become part of everyday life. The use of electronic cigarette terminology has increased so significantly in recent years that the vocabulary around the replacement cigarettes has grown too.

Traditionally, simply looking for an electronic cigarette would have been quite a simple task but nowadays the range of products on offer means that it can seem daunting for someone who’s looking to swap from tobacco cigarettes for the first time. Most ‘newbies’ will play it safe with a tobacco flavoured replacement product, and often go for a disposable item so that they can see if it suits them before investing any more money. This is fine for beginners and is a safe way to make the transition from traditional tobacco to replacement devices. – they are also a great emergency product for any smoker who unexpectedly finds themselves in a no smoking area - But ultimately the range of e-cig starter devices are a great gateway to give up tobacco entirely.

This initial step into the world of electronic cigarettes is often a smoker’s first exposure to the range of alternative products available, and they can see just how many devices there are available. One of the first terms that was adopted is ‘e-cigs’, and many public places that allow replacement devices to be used will simply refer to every gadget as an e-cig, which covers the full range available. This is probably the most commonly researched term online when shopping for electronic cigarettes, and many customers head towards specialised retailer websites like Vapouriz, where the selection spans from beginner’s disposable e cigs to reusable sets for experienced users.

Here at Vapouriz, we try to help explain the components properly and address the potentially confusing terminology (If you're a vaping noob!) 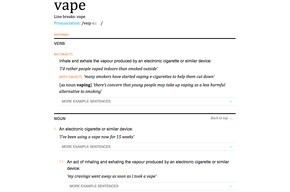 The other new term that the dictionary added was ‘vape’ and this can often seem a little confusing. Vape might seem like it refers to what comes out of the e-cig while it’s being smoked but it actually isa term used for not only the act of 'vaping' but also the device itself! People who use e cigs are often referred to as 'vapers'. For users that have fully converted to alternative smoking devices it’s deemed the best bet to buy refillable electronic cigarettes and then stock up on their favourite e liquid in bulk to keep costs down.

One of the best things about vaping is that it ie liquid available in a wide selection of flavours, so the vape exerience can be changed as needed, making it more enjoyable. One obvious health benefit of changing the vape flavours is that users will be able to switch from the ‘tobacco’ flavour and therefore be less tempted to go back to traditional tobacco products. Because e-cigs only contain nicotine as an active ingredient they are significantly safer than tobacco products, and are therefore something many smokers aspire to switch to, and being able to go to a tobacco flavour first is a big step in easing this transition.

With this increasing consumer sophistication and knowledge, suppliers have to provide a selection of products to meet customer demands. There are fantastic starter kits with different features to suit different users. Coloured tanks are very popular and stylish e-cigs are definitely more popular; an ironic twist on the fact that after the smoking ban tobacco cigarettes became very socially stigmatised but now smokers can use their electronic devices with pride. Vapouriz even sell a beautifully carved wooden e-cig case that is reminiscent of the elaborate and collectable lighters that smokers traditionally used to collect.

One initial problem users had when switching from soft traditional cigarettes to the hard cased e-cigs was the risk of damage to the unit, often making them a costly alternative. However, just as in any market, the manufacturers have listened and there are now many accessories designed to tackle this particular issue. There are protective lanyards that are perfect for a night out or even navigating a busy commute to work on the underground. For the ultimate in convenience many devices can still be smoked while in the lanyards – a sign that customer concerns are swiftly being addressed by manufacturers.

As consumer choice has increased so has the discussion and awareness of electronic cigarettes and now it seems strange that smoking in public buildings was ever allowed. Electronic cigarettes are no longer a niche product, they’re growing in popularity and they’re here to stay: and not just in print in the dictionary.