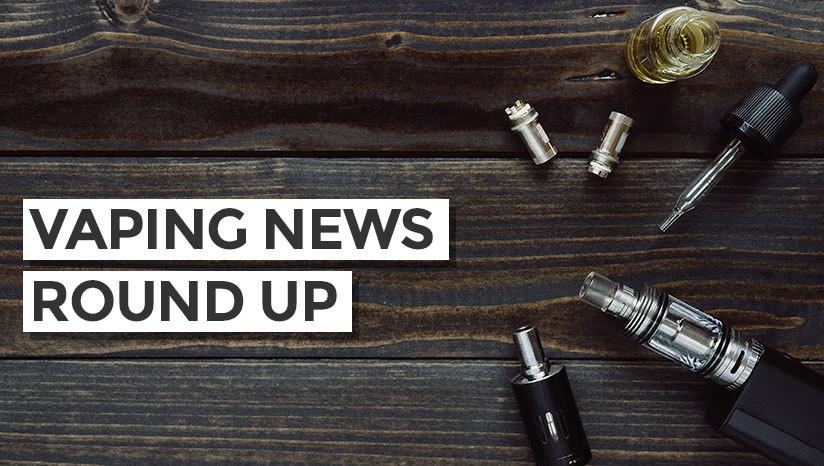 Vaping News Round Up

It’s been a big few weeks for vaping news around the UK, so we thought we’d take a look at some recent big stories about vaping and the e-cigarette industry.

One of the biggest vape news stories just now is that new regulations shortly coming into force around the UK will have an impact on vapers, too. These new rules form part of the Tobacco Products Directive (TPD) from the EU.

The new TPD rules are part of a wider shake-up of laws regarding both e-cigarettes and tobacco cigarettes. For traditional tobacco smokers, the laws mean that cigarette packs need to now be sold in drab, warning-filled packaging, in minimums of 20 in a pack to make them more expensive to buy. Menthol cigarettes and small packs of rolling tobacco are also being banned from the shelves. This is to stop cigarettes from being ‘appealing’ in both appearance and taste – for instance, menthol can disguise the taste of tobacco in cigarettes and result in people smoking more – and to discourage children and non-smokers from trying cigarettes. The big tobacco companies tried to appeal against the laws, but lost, so the new rules will come into effect on 20 May 2017.

What does this mean for vapers? Included in the new rules are vape specfic restrictions, like:

Much of this could actually be very good news for vapers, as you’ll be able to see exactly what is in your e-liquids, but a smaller tank size could be a nuisance for some. Find out more about the Tobacco Products Directive vaping laws.

In other vaping news on regulations, Scotland has also passed a new law banning the sale of e-cigarettes to under 18s. This is to stop children from being able to buy products with nicotine in them, and brings Scottish law in line with English law, which put the same ban in place in 2015.

Vaping on the rise

A new study has shown that one smoker switches to vaping every four minutes in Britain, with some 56.7% of smokers making the decision to stop smoking tobacco cigarettes in 2015. It’s also been found that many big cities have a good number of vaping shops – Edinburgh is currently in the lead with 17 vaping outlets, with London and Birmingham at 10 each and Belfast with 8.

One piece of vaping news has suggested that a number of vaping shops have been selling e-cigarettes to non-smokers, which goes against a voluntary code of conduct for the vaping industry. Some non-smokers want to use e-cigarettes in order to try cloud chasing and vaping tricks, but are being sold e-liquids containing nicotine, or are not being asked if they have used e-cigarettes before.

Vape Jam was held in London on 7-9 April 2017, giving international e-cigarette and e-liquid suppliers around the world the chance to showcase their wares. Visitors were given a sneak peak at the hottest new flavours soon to be out on the market, as well as cool new kits.

There’s a 21-year-old ‘Vape God’ out there who does tricks so impressive that rapper Drake even flew him out to his LA mansion to get vaping tips from him. Austin Lawrence quit cigarettes in 2014 and turned to e-cigarettes – he now manages a vaping shop, creates amazing vaping videos, and impresses folk around the world with his awesome cloud shapes like triangles, jellyfish and giant Os.

Our final piece of vaping news is that Sheffield Hallam University is looking to recruit over 250 smokers for a three year study which will examine the benefits of using e-cigarettes when you quit smoking.