EU Referendum: Are you in or are you out?

With the EU referendum vote just a day away, there are many views on whether the UK should stay in the EU or leave the EU after being a member for approximately 43 years.

Some of the most debated views come from the vaping community (a significant 2.5M vapers in the UK now), particularly after the Tobacco Products Directive (TPD) legislation came into effect last month, which has changed the landscape of the electronic cigarette market significantly.

Will the EU referendum affect vapers and if so, what specific issues are going to affect the vaper vote? The past has proven that the vaping community has had significant sway and can affect change when they band together. The defeat of the recent Wales vaping ban in public places in the Welsh Assembly is a prime example of that.

With the growing support for vaping and variety of opinions on the matter, from consumers and recognized health experts alike, E-cigarette Direct recently conducted a survey with 1200+ vapers to see how the vaping community feels about the upcoming EU vote. 56% wanted to leave while only 17% wanted to stay in the EU. The most prominent reason for influencing vapers to leave the EU is due to incoming regulations on e-cigarettes (like TPD) and planned taxation from 2017. 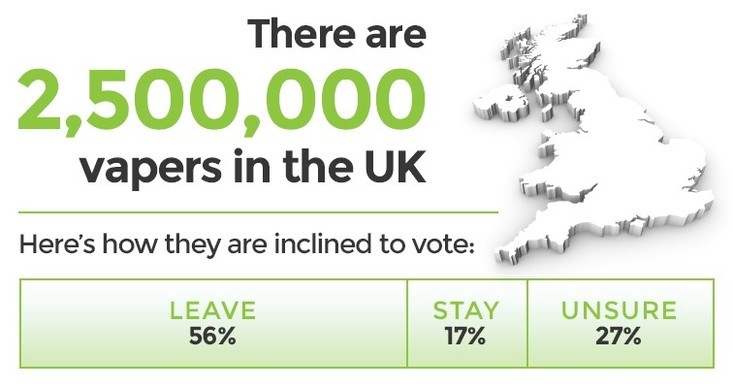 View the full survey and infographic at E-cigarette direct

How will voting in or out affect vaping?

Experts and professionals within the vaping community have voiced their opinions including Jessica Harding, Vapers in Power - “The drafting of the TPD into law revealed the worst of the EU” with Clive Bates, Ex Action on Smoking and Health and Blogger at The Counter Factual, has highlighted the restrictions of the EU and TPD.

While the majority surveyed indicated a vote for leaving the EU in the hopes of avoiding upcoming restrictions and planned taxations, and minimizing any potential further restrictions that could impact the life-saving potential of electronic cigarettes, there are concerns that Brexit would still have to comply with EU single market regulation to have continued access to the EU and its vaping community that are facing far harsher e-cigarette restrictions than the UK.

What happens if we stay in the EU? The British government will have a veto on all tax measures and the Commission has already written to the British government to express its fears about vaping. However, the Medicines and Healthcare Products Regulatory Agency (MHRA) has proven their flexibility implementing the TPD, largely due to the support of senior scientists who are for vapping and shown that they, as well as the British government, don’t share the same views on stricter e-cigarette regulations. Lord Callanan has proven this by filing a motion through the House of Lords to fight the restrictions of TPD which despite being withdrawn due to insufficient support still showcases that the British government and EU’s interests don’t always align and that the UK isn’t afraid to be the black sheep of the Union.

With the vaping community indicating concern that the European Commission aims to restrict people and businesses by enforcing further restrictions, Brexit is looking like more of a reality for vapers. However, if we choose to stay the UK Government has proven that they are pro-vaping and will stand against the EU and the TPD. One thing is for sure, this week and the result of the voting will definitely promise to be interesting.