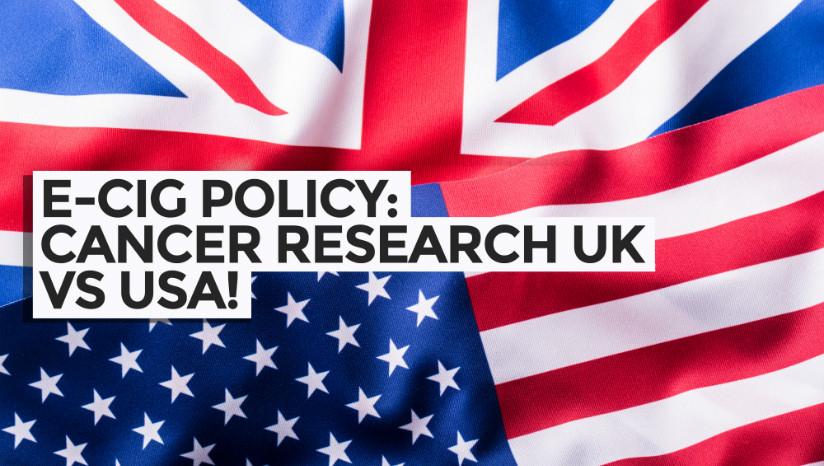 A study by the US Surgeon General raises fresh concerns about vaping but Cancer Research UK have raised their own concerns about the study itself, calling into question the points that it raises!

A damaging report into vaping by US Surgeon General Dr Vivek Murthy has been intercepted by Cancer Research UK, arguing that the report doesn’t tally up with UK evidence on the effects of vaping. Calling the arguments of the report into question, Cancer Research UK released a counter statement on their science blog highlighting the fact that the Surgeon General can’t distinguish between vaping products and products that contain tobacco.

The Surgeon General is the United States’ leading spokesperson on matters of public health and in the report published last week, Surgeon General Doctor Murthy claims that e-cigarette use among youth and young adults is a major public health concern. However, the statement which is packed full of misleading quotes such as ‘These products are now the most commonly used form of tobacco among youth’ is flawed in its understanding of the products in question.

One of the most obvious differences between e-cigarettes and traditional cigarettes is the fact that e-cigs do not contain tobacco. For those who are not fully clued up on e-cigs, the e-liquid which the device heats up to produce the vapour that you inhale does contain nicotine, although nicotine-free liquids are widely available and there are various strengths of nicotine available depending on how many cigarettes you’re used to smoking each day. Under European legislation, e-cigs are classified as a tobacco product here in the UK due to the nicotine content of the liquid, despite containing no tobacco whatsoever. However, e-cigarettes are recognised as a safer alternative to smoking by many public health bodies including Public Health England who say that e-cigs are at least 95% less harmful than traditional cigarettes.

In Cancer Research UK’s counter statement released on December 9th the organisation tackles the US report’s misleading stance on the danger of nicotine stating that ‘although nicotine is addictive and has some known harms, it doesn’t cause smoking-related diseases, such as cancer and heart disease’. Cancer Research UK also debunk the myth that it is possible to overdose on nicotine, reminding nicotine users that ‘you are in no danger of poisoning yourself, nor have there been any cases of overdose from inhaling the nicotine-containing fluid that an e-cigarette vaporises, known as e-liquid’.

Not only have Cancer Research UK condemned the US report over its damaging misrepresentation of e-cigarettes as a tobacco-based product, the organisation has placed much emphasis on the contrasting consensus held by UK based health professionals in addition to highlighting the e-cig industry’s key role in harm reduction – a public health policy aiming to diminish the impact on the health of individuals using items containing harmful substances.

Cancer Research UK outlined the e-cigarette industry’s contribution to harm reduction by drawing parallels with other innovations that have led to huge reductions in harm to the general public, stating that ‘condoms don’t completely eliminate the risk of sexually transmitted infections, but they reduce the risk of contracting one by about 99%. Same goes for seatbelts and airbags in car accidents’.

The Surgeon General’s report claims that the US has seen a rapid increase in the amount of middle school and high school students using e-cigarettes but the figures here in the UK are quite the opposite. Cancer Research UK state that ‘Smoking among young people is at an all-time low, and continues to go down. And surveys across the UK last year found that young people who hadn’t smoked weren’t becoming regular users of e-cigarettes’.

Cancer Research UK cite that controversy has arisen from the fact that while e-cigarettes are no more than a preferred smoking cessation for many, they’ve become a lifestyle choice for many others with a whole sub-culture evolving from the sub-ohm vaping scene and there. Concern has been expressed over teens becoming attracted to this sub-culture, however, the sub-ohm subculture has been established for a few years now and the evidence previously mentioned does suggest that e-cig use is extremely rare among young non-smokers.

Cancer Research UK are among 13 UK public health bodies who recently released a joint statement agreeing that e-cigarettes are significantly less harmful than smoking and that there should be greater public awareness of the e-cigarette’s effectiveness as a smoking cessation method. The list of signatories includes Public Health England, Action on Smoking and Health, Association of Directors of Public Health, British Lung Foundation and Cancer Research UK.