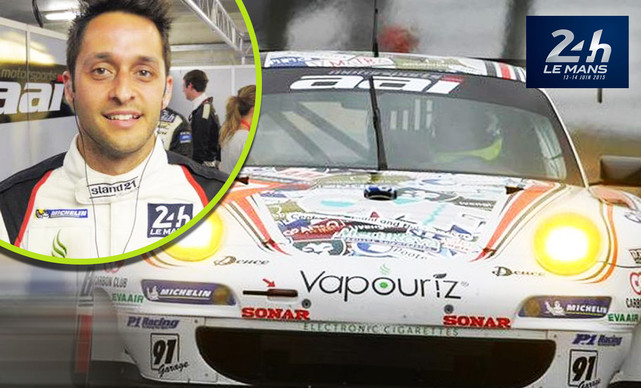 This year Vapouriz were very proud to sponsor Alex Kapadia of Team AAI’s Porsche 911 in the 24hr Le Mans 2015!

We caught up with Alex Kapadia just before his debut to ask him some questions about how he was feeling before the big race and of course about his incident Friday evening...

Who is Alex Kapadia?I am the very happily married husband to my beautiful wife Jenna, and I hope I am viewed as a talented, quick, safe pair of hands as a professional racing driver and driver coach by my racing peers and teams.

What/who inspired you to get into racing?My father was a successful book designer creating layouts for many books and provided much of the photography himself as an accredited Formula 1 photographer for many years. His photography, particularly of Ayrton Senna just put the hooks into me for the sport and the man I think. My parents encouraged my interest, beginning with radio controlled cars and something clicked, more so after I started competing and winning. They got me a kart and I knew instantly that a racing driver is what I wanted to be and I could take a talent and turn it into a success with hard work and application. I confess like all boys Formula 1 was initially my dream but as I grew up and learned all I could about the sport I knew Le Mans was the biggest, hardest and longest race in the world. I came here as a fan six years ago, on of all things a friends stag weekend, and realised that it was both an amazing race and an amazing event, there'll be 300,000 people here this weekend and the build up to the race goes on for an entire week reaching a crescendo with race itself. It is the pinnacle of motor sport.

What have been your career highlights so far?European Le Mans Series Class Race Winner in 2012, Class winner at the Dubai 24 hours in 2010 in an Aston Martin V8 Vantage, Radical European Champion in 2009 as the lead driver and coach to my team mate Jeff Collier and the British Formula First Champion in 1999.

Tell us a little more about your car…The Team AAI Porsche 911 GT3 RSR is a sophisticated GT racing car for sure with a lot of adjustment in its suspension, engine and electronics designed for endurance racing and to go very fast for a long time. It is unique in so much as it is the only older 997 model of the 911 in the race for Le Mans this year. The most interesting part of the entry is the multinational makeup of the people involved this fantastic French race. The car is obviously German, it's a Porsche, but is prepared for racing by Team AAI in Taiwan, it is being run at Le Mans by ProSpeed Competition from Belgium by an Italian Chief Engineer for a Taiwanese, British and Dutch driver. But this a global event so I suppose it's only to be expected. 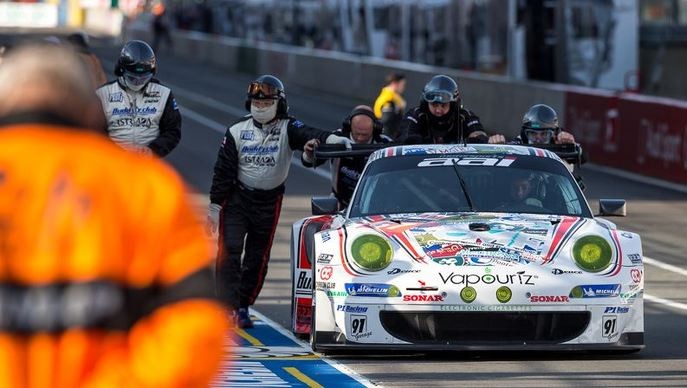 What is the driver set up for Le Mans?I like to know as much as possible about the car, the track, the team and my co-drivers as well as working to maximise my own potential, but to help everyone maximise theirs. So this week I'm working with Xavier Maasen, an experienced Porsche GT driver, and Jun-San Cheng who is new to Le Mans and relatively inexperienced at racing at this high level. I see my role to support Xavier and San with my driving, work with Xavier and our engineer to get the best set up, and coach and provide advice and expertise to San. In working as a team along with our mechanics and engineers we'll achieve the best possible result. And to be at my best, to do my best, I use a personal trainer as professional sportsman would do to maximise his physical performance in temperatures that are in the 90s this week outside the car and the inside of any race car, particularly a closed GT car is a hostile environment in a race suit and helmet.

Driver stints are typically between 50 minutes and an hour depending on safety periods but we could and will double or triple stint the tyres to save time changing either in fuel stops, with idea that time spent stationary is time lost on all the other teams track. Invariably the winning cars are the cars that spend the least amount of time in the pits for service or repair. 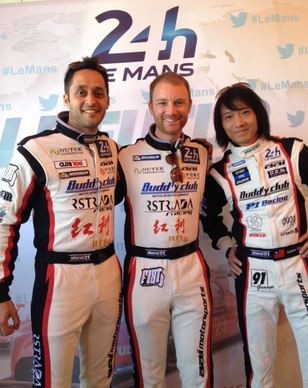 You had a little mishap on Friday evening – we’re glad to hear you’re fine – Tell us what happened!We had an oil fire last night as I was heading on the Mulsanne Straight. I had had the oil pressure light coming on a few times and radioed through to tell the team, I came in to the pits and everything was checked out, then I went back out of the pits at the first corner and the light came back on again, our engineer Massimo then came on the radio and said: 'stop the car, stop the car.' I dipped the clutch immediately and pulled off, it was then I could smell smoke and could see some fire at the back. I got clear of the car but was helpless for about a minute as the car burnt but the damage is confined to the engine bay and there is no damage to the shell, but the engine and gearbox have to be changed and Porsche have been incredibly helpful to the team bringing in parts from Germany for the team who are rebuilding the car up from its shell over night for the race start tomorrow and I'm grateful to those guys for sacrificing another night’s sleep as tomorrow during the race they'll get very little opportunity to rest again.

How are you feeling about the race now?To have worked so hard for this opportunity and so close it's been a bit of rollercoaster the last day or so we were making huge strides in car set up, to run closer to the front in our class GTE-AM but I know I'm with a great team and any driver is always standing on the shoulders of the team and indeed the sponsors who support him and I'm grateful and proud to have Vapouriz as part of that team this week.

What do you plan to do tonight before the big race?We've all been ordered to bed early tonight and turn off all our mobile phones and to have no other unnecessary distractions so our focus is resting up ahead of the long race ahead.

Tell us a fun fact about yourself that perhaps your fans don’t already know about you! You should see me Moonwalk I'm as good as Michael Jackson. And if we finish well after 24 hours at 3pm on Sunday I just might moonwalk for the team. 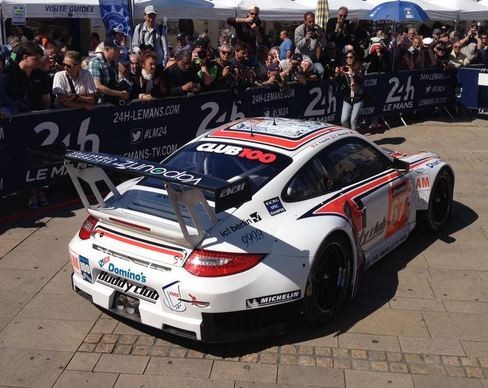