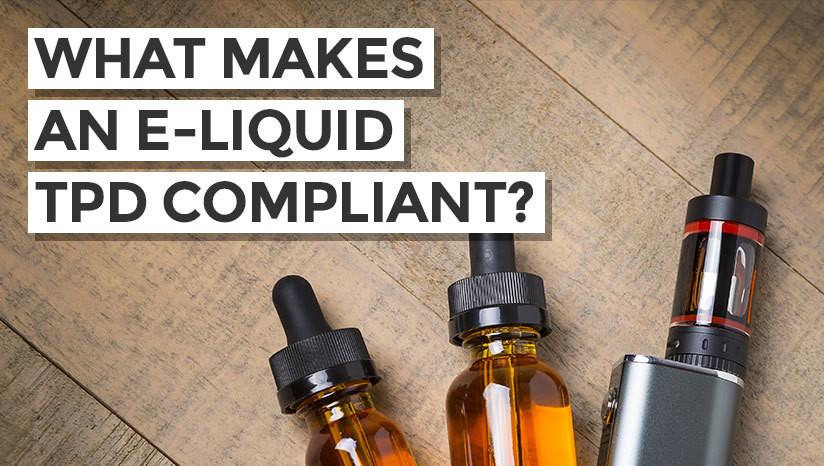 What makes an e-liquid TPD compliant?

May 2017 sees a new set of regulations come into force which affect the sale and manufacturing of e-liquids, along with some e-cigarettes.

We take a look at what the laws mean for e-liquids, and how to find out if an e-liquid is TPD compliant.

One of the biggest changes for TPD compliant e-liquids is that the nicotine levels will now be capped.

A TPD compliant e-liquid will now have a maximum nicotine concentration of 20mg/ml, commonly written as 2% concentration.

People who heavily rely on nicotine, such as heavy smokers who use e-cigarettes to help them quit tobacco cigarettes will notice the biggest change here.

For most vapers, however, this shouldn’t prove to be much of a problem, as even a 1.8% nicotine strength is considered high, and many vapers choose something in the 0.6%-1.8% range, while cloud chasers tend to opt for very low or nicotine-free formulas.

Good labelling, any necessary warnings and lots of information will all be evident on a TPD compliant e-liquid.

It’s now a requirement that all ingredients which make up over 0.1% of the final formulation of an e-liquid are now listed. This is good news for vapers, as it means we’ll know what’s in our e-liquids – no more worrying about cheap or imported e-liquids with potentially bad ingredients in them. It doesn’t mean we’ll need to see lots of confusing e-numbers or similar listed, rather than manufacturers should list the nicotine, VG and PG, and flavourings like ‘vanilla flavour’ etc.

TPD compliant e-liquid packaging also needs to be child-resistant, and tamper evident – more good news for vapers, as we can see nobody else has been in our e-liquid first!

Something that will potentially mean a big change is that e-liquids now have to come with instructions about safe product use, storage etc. This will probably need to take the form of a leaflet, and between that and the ingredients list may mean that most e-liquids will now be presented in a box and not just a bottle.

As well as needing to label e-liquids with an ingredients list, manufacturers are now banned from using certain ingredients in a TPD compliant e-liquid.

The main ingredients to be banned from TPD compliant e-liquids are colourings, caffeine and taurine (an amino acid sometimes added to energy drinks).

From now on, TPD compliant e-liquids can’t be sold in a refill container over 10ml in size.

Similarly, tanks can no longer be manufactured with an e-liquid capacity of more than 2ml. New models like the Aspire Cleito EXO are already being released to help give sub-ohm vapers more tank space through ingenious use of slimline coils in TPD-compliant vape kits.

Finally, all new TPD compliant e-liquids now need to submit a notification about their product to MHRA six months before they intend to put their product out on the UK vape market. The same is true for new e-cigarettes, which must be approved before release.

While this might mean that innovation, particularly with spontaneous or new e-liquid flavours, is slowed, in the long run this will mean better safety for vapers, and manufacturers will soon be able to plan flavour releases throughout the year.