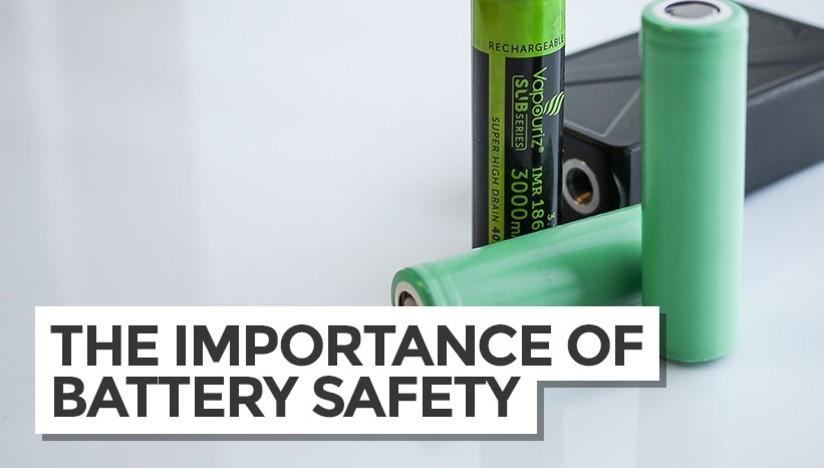 The Importance of Battery Safety

Battery safety is one of the most important aspects of vaping but some choose to ignore the guidelines making vaping dangerous for themselves and those around them. Join us as we discuss the importance of battery safety!

The vaping industry prides itself on sharing valuable knowledge and advice surrounding the constantly evolving hardware emerging in this consistently exciting market. However, the occasional mishap caused by negligence in treating products with the correct care can be picked up and misconstrued by the media and, despite industry-wide efforts to promote easy-to-follow safety guidelines (often included in the packaging of the vape device), the vaping industry’s reputation often takes a beating due to the negligence demonstrated by individuals choosing not to use the safety information freely offered by so many responsible manufacturers and suppliers.

Nobody deserves to be injured, especially when using a product designed to help them lead a smokefree lifestyle. However, there have been various reports of vaping devices exploding, causing serious injuries to those using them. You don’t need to be an expert in vaping hardware to dig a little deeper and understand that the majority of these reports are not actually about devices spontaneously exploding, but instead about loose batteries that are not being handled in a safe or responsible manner.

The latest story to cast a negative light on the vaping industry emerged on Sky News over the weekend, featuring a young father whose vaping device’s battery exploded in his pocket while spending time with his young family. Studying the photograph of the exploded ‘device’, it is clear that it is not a complete device at all but instead a single 18650 battery, commonly used in sub-ohm vaping devices. According to the article in question, the loose battery was being stored in a trouser pocket without any form of protection, such as a recommended battery case.

In this particular scenario, the explosion will most likely have been caused by the naked battery coming into contact with other metallic items in the pocket such as keys or coins, causing the battery to fire. It only takes a quick glance over recommended safety guidelines to learn that you should never carry batteries loose in your pocket or bag and should instead transport them in a plastic case. These protective cases are cheap, widely available and strongly recommended by any responsible battery seller. Any type of battery needs to be treated with the right safety precautions and batteries used in e cigs are no different.

The article also reports that plastic surgeons from one hospital in Swansea have experienced five cases involving burns caused by e-cigarette batteries and the surgeons have attempted to address the issue by contacting trading standards as well as producing a paper on the five incidents, demanding tougher regulations for the import of vaping products, as well as more guidance for consumers. However, battery safety is widely acknowledged throughout the industry and any responsible supplier will offer free advice on battery safety for anyone purchasing a battery or device. We provide a clear set of battery safety guidelines which clearly state all of the imperative safety tips for battery handling and ownership.

Unfortunately, as seen in reported cases, the advice given is sometimes ignored, so it’s important to us to stress the significance of battery safety. Batteries are not built to explode. The last thing manufacturers want to do is severely harm end users just to make an easy buck, and vaping retailers do not want to drive away repeat customers with faulty, low quality batteries. It may be a hard truth for some to accept, but the phenomenon of ‘exploding vaporizers’ reported by the media is so often down to human error and this can be avoided by using common sense and following the safety guidelines widely available across the industry.

E-cigarette users are advised to follow these safety tips when charging: