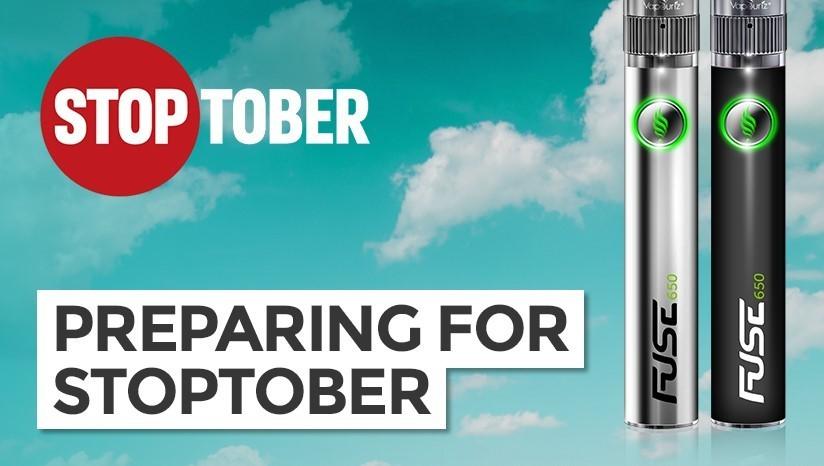 Ensure you’re prepared for Switchtober with this guide to getting motivated and gathering the right gear for your needs!

Switchtober is just a couple of weeks away and now is the perfect time to start thinking about what you need to get motivated to kick the habit! Ensuring you’re prepared with all of the right kit is one thing, getting in the right mindset is another. Fear not, because we’re here to help you think ahead!

In recent months there has been a lot of encouraging news surrounding vaping. Taking a look back at a few of these news stories is a great way to muster up plenty of enthusiasm and get in the right mindset!

‘E-cigarettes around 95% less harmful than tobacco’Back in August 2015 Britain's Department of Health released a study reporting that Electronic cigarettes are around 95 percent less harmful than tobacco stating also that they should be promoted as a tool to help smokers quit. Speaking about the report, Professor Kevin Fenton from Public Health England, who carried out the study "E-cigarettes are not completely risk-free but when compared to smoking, evidence shows they carry just a fraction of the harm".

‘E-cigs Helped 15 Million Smokers Quit or Cut Back’In June of this year, a survey published by the journal addiction claimed a combined total of 15 million smokers in Europe were able to quit smoking after switching to e-cigarettes. Based on data gathered throughout Europe during 2014, the survey reported that 6 million Europeans have quit smoking completely using e-cigarettes as their chosen smoking cessation method while another 9 million had successfully cut back on tobacco by taking up vaping.

‘UK Government Releases Workplace Guidelines That Work in Vapers’ Favor’Back in July the UK Government issued guidelines advising employers to make a clear distinction between vaping and smoking and urging bosses to allow dedicated vaping areas inside buildings instead of forcing those trying to quit tobacco to vape in smoking areas where their likelihood of quitting could easily be diminished.

‘Major UK Health Organizations Call For Greater Recognition of Vaping As An Effective Method For Quitting Cigarettes’Bringing a second dose of positivity to the vaping masses in July, Public Health England released a statement signed by 13 other major UK public health organizations outlining a unified view that e-cigarettes are ‘signicanly less harmful than smoking’ and stating that ‘e-cigarettes are the most popular quitting tool in the country with more than 10 times as many people using them than using local stop smoking services’.

So now that we’re all feeling positive and motivated let’s take a moment to think about preparing for October 1st. Whether this is the first time you’ve attempted to quit or cut back or you’re already vaping as well as smoking and hoping to give up tobacco completely, you need to ensure you’ve got the right kit for your needs before Switchtober begins!

Get Started With A FUSEThe FUSE starter kit is perfect for first-time e-cig users. Designed by advanced vapers who understand exactly what a newbie needs, the FUSE kit is light, compact and easy to charge. It has a powerful battery, dual coils for providing a satisfactory throat hit and it’s even fitted with a tank that recently won us an award!

Upgrade To The VOLTAIRIf you’re a dual user (which means you’re vaping to cut back on smoking, therefore still smoking cigarettes too) and you’re looking for something more powerful to help you make that final step away from smoking tobacco then the VOLTAIR is a great way to step up to sub-ohm vaping!

With this 50W sub-ohm starter kit, you’ll be blowing bigger clouds with greater flavour than a standard e-cigarette! Slightly longer and chunkier than a classic e-cigarette, the VOLTAIR features manual airflow control so that you can control the throat hit!

Find The Right JuiceFinding an e-liquid (also referred to as ‘juice’) that you adore is a sure-fire way to make sure your vaping device is always in your hand, stopping you from returning to certain habits you’re trying to kick! There’s a seemingly infinite array of e-liquids out there covering an immense variety of flavours, from classic tobacco flavours to fruits flavours, mints and menthols, drinks and beverages, sweets and deserts and many other surprising flavours and blends! Whether you’re finding a daily vape for your classic e-cigarette or sub-ohm device, we’ve got a great range of our UK-made flavours!

So there we have it! Feeling motivated and clued up on kit? Be sure to check back with us when Switchtober begins – we’ll be doing our best to keep you motivated along the way!