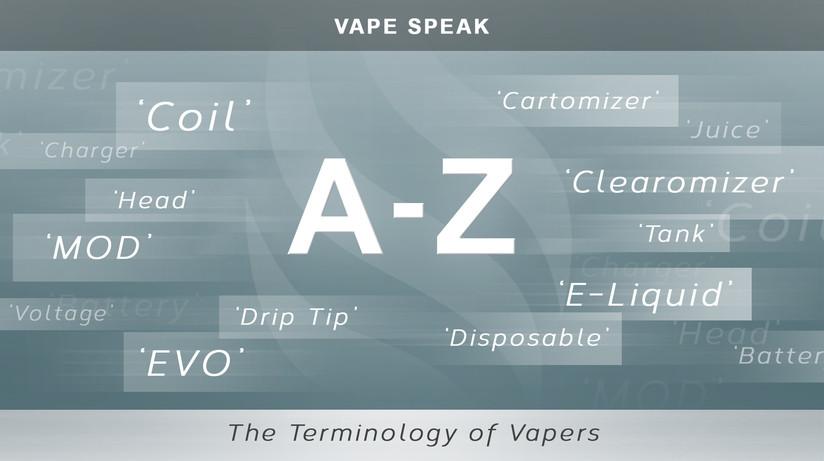 An A to Z Terminology Guide For E Cigarettes and 'Vapes'

Whether you're a vaping pro or a 'newbie', the terms associated with vaping are numerous and often a little confusing! Here at Vapouriz, we've decided to put together a guide with pretty much every relevant vaping term that you're likely to come across to help with the terminology. Feel free to let us know if we've missed anything!

The Dictionary of E Cigarette Terminology:

Adapter – Specific style of atomizer or cartomizer to fit onto a different battery.

Atomizer (Atty) – The part of an e-cigarette that vaporizes the 'E Juice' or E Liquid.

Automatic – An electronic cigarette battery in which the atomizer is activated when the user draws on the mouthpiece.

All Day Vape - The e-liquid you like the most… the one flavour you always come back to.

Battery (Bat) – Powers the element which heats the juice to produce vapour.

Bridge – The U-shaped covering inside of the atomizer used to absorb liquid and help it towards the heating element.

Cartridge (Cart) – A tube-like piece stuffed with absorbent filler that holds the juice.

Cartomizer (Carto) – A combination of cartridge and atomizer.

Charger – A battery charger that replenishes your e-cig battery.

Dual-Coil Cartomizers – A type of cartomizer that employs two coils providing about 1.5ohms of resistance.

Drip Tip – An accessory to use with an atomizer or cartomizer comprising an open mouthpiece allowing a vaper to drip juice directly onto the atomizer.

Dripping – Adding juice to the atomizer. A user will drip a few drops directly onto the bridge before vaping. Used with a Drip Tip.

E-Juice (E-Liquid/Juice/Smoke Juice) – The liquid vaporized in an electronic cigarette.

eGo – An electronic cigarette that utilizes the 510 threads and allows one to use 510 components but with a much larger battery.

EVO - A smaller variant of the Vapouriz tank - this little vapourizer is one of the most powerful units in the world for it's size!

Filler Material (Filler) – Absorbent material inside a cartridge to help keep the juice inside and deliver it to the atomizer at an optimal pace.

Flooding – Too much juice applied to the atomizer, causing a decrease in vapour production and flavour.

Food and Drug Administration (FDA) – The branch of the United States government that oversees rules and regulations pertaining to the safety of food and drug products sold in the USA.

Forums – There are a growing number of forums dedicated to vaping, such as the ECF or Electronic Cigarette Forum.

Head – The part of the cartomizer that has the wick attached.

Juice – (E-Liquid/E-Juice/Smoke Juice) – the liquid that is vaporized in an electronic cigarette.

Leaking – When too much juice is added to an atomizer or cartomizer.

Light Emitting Diode (LED) – A light used in some electronic cigarettes to indicate the device is in use.

Liquid – (E-Liquid/E-Juice/Smoke Juice/Juice) – The liquid vaporized in a electronic cigarette.

Manual – A battery that has a button that activates the heating element. This style of e-cig is less like a traditional cigarette but preferred by many because it is sealed and can not be affected by leaking.

Milligrams (mg) – The amount of nicotine found in a juice. A medium level of nicotine is around 12mg.

Milliliters (ml) – The amount of juice in a given container.

Mini – An electronic cigarette about the same size as a traditional cigarette.

Mod – Modifications to a device or accessory (such as getting more vapour production out of your cartridges) or a design variation of a commonly manufactured electronic cigarette.

Passthrough – A device that plugs directly into a USB port or a charger.

Pen Style – An electronic cigarette that resembles a ballpoint pen.

Personal Charging Case (PCC) – A case that can be taken with a user to charge electronic cigarette batteries when away from a power outlet.

Pull - The act of sucking the mouthpiece of your electronic cigarette

Smoke Juice (E-Liquid/Liquid/Juice/E-Juice) – The liquid vaporized in an electronic cigarette.

Starter Kit – The basic e-cigarette equipment. Most come with one or more atomizers, one or more batteries, a charger and four or five pre-filled cartridges.

Throat Hit (TH) – The sensation felt in the back of the throat when vaporizing juice that contains nicotine.

Triple-Coil Cartomizer – A newer type of cartomizer that employs three coils providing about 1.6ohms of resistance.

TANK – Vapouriz's own variant of the Clearomizer

Vaping - The act of using an e-cigarette

Vapour Production – How much vapour is produced on an average inhale.

Vegetable Glycerol or Vegetable Glycerin (VG) – An ingredient found in most brands of e-juice. Typically, VG produces more vapour than its PG counterpart.

Wick – A narrow piece of string inside some attys that allows easier delivery of juice to the heating element.