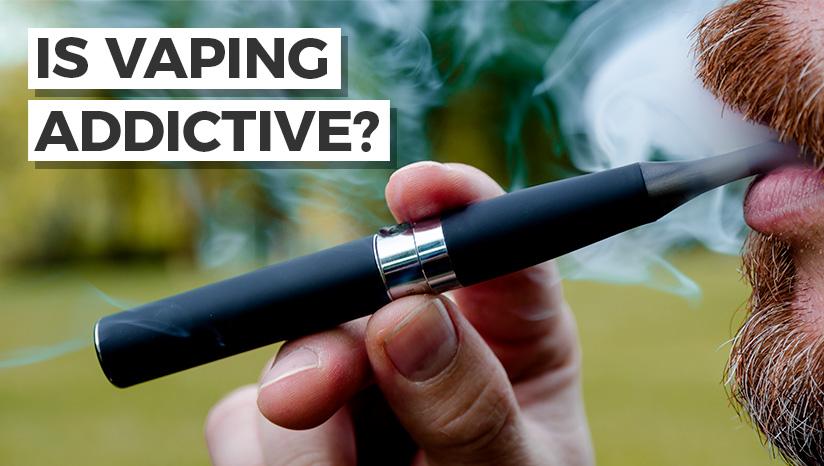 Whether or not vaping is addictive and if it’s a safe alternative to smoking is a controversial topic and there’s a lot of misinformation going around.

Today we’re taking a look at some of the commonly-asked questions about vaping, how it compares to smoking and whether or not it’s addictive.

A: Confusion about vaping addiction is typically because people don’t understand the role nicotine plays. Like when present with cigarettes, nicotine is addictive, and if you’re vaping e-liquids that contain nicotine this is still true. However, the nicotine levels present in e-liquids vary and many vapers choose to avoid nicotine altogether or opt for e-liquids with very low levels of the substance.

A: Nicotine is addictive but it isn’t the cause of smoking-related diseases. You can’t overdose on nicotine using e-cigarettes – if you do have more than you’re used to however, you may feel nauseous or light-headed.

Q: How much nicotine is in e-liquid?

A: You can get e-liquids in a range of nicotine strengths, typically ranging from 0mg to 18mg. This measurement refers to the number of milligrams of nicotine per millilitre of e-liquid.

Q: How much nicotine is in a cigarette?

A: Cigarettes traditionally have higher levels of nicotine than e-liquids, though the amount varies by brand. In the average cigarette there is approximately a gram of tobacco, which works out to 8.4mg of nicotine.

Q: Do all e-liquids have nicotine?

A: No. It’s easier than ever to find e-liquids which are completely nicotine-free, so you never need vape with nicotine if you don’t wish to do so.

A: Yes. Research shows that vaping is far less harmful than smoking and that levels of key harmful chemicals are lower in those who switch from traditional tobacco products to e-cigarettes.

Q: What is a nicotine shot?

A: Unlike second-hand smoke from cigarettes, which we know to be harmful, there is no evidence that second-hand vapour from e-cigarettes is dangerous to others. Until there are longer-term studies available with more concrete evidence, many parents in particular choose to follow the same rules with vaping as they would with smoking tobacco; smoking outdoors, away from children, and not in the car.