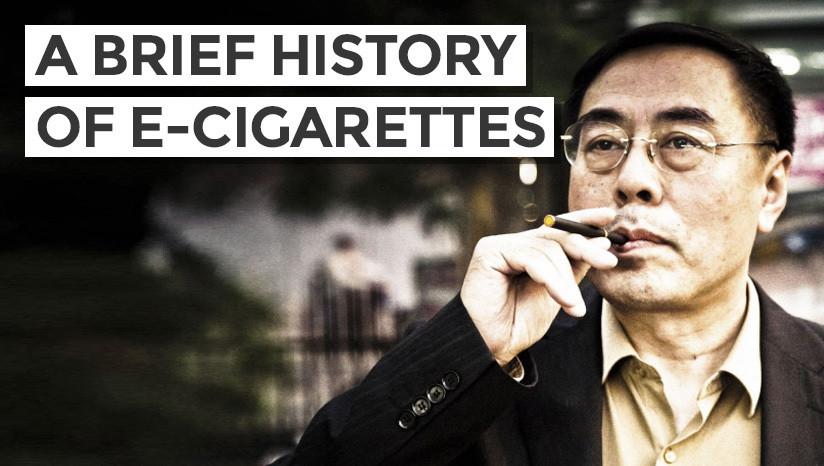 A Brief History of Vaping and E-Cigarettes

Find out everything you need to know about the history of e-cigarettes including who invented them and how they came to be so popular.

Ever wondered where the e-cigarette came from?

They may seem like a very recent invention, but e-cigarettes have been around for quite a while now, in one form or another.

There were devices invented to inhale vapour or replicate cigarettes back in the 1920s and 1960s, but they never quite took off, perhaps because smoking was so popular, and the health risks it posed were less well known than they are now.

It wasn’t really until 2003 that e-cigarettes as we know them came into being. The prototype electronic cigarette device was invented in Beijing, China, by Hon Lik, a 52-year-old smoker and pharmacist.

The company he worked for at the time developed his prototype and sold it to the receptive Chinese public – it was so successful that the company even changed their name to Ruyan, which means ‘like smoking’.

By 2006 e-cigarettes had made their way to Europe, and then to North America. They started off as quite expensive items, but over the years, as more companies manufactured them, the price came down and popularity went up.

There were some turbulent years for e-cigarette users and makers in North America and Australia as regulations for the devices were put in place, but in the UK they continued to grow in popularity. This was partly due to support from organisations like ASH, who saw the potential for e-cigarettes to help reduce the number of tobacco smokers in the UK, and therefore reduce deaths and illnesses from tobacco smoking.

E-cigarettes suffered some perception knock-backs due to misreporting and tough government legislation many years ago – some people still think that they can be almost as harmful as cigarettes, while others believe they can be a ‘gateway’ to tobacco for non-smokers.

There’s also the problem that because e-cigarettes as we know them are still a relatively new invention, there’s not yet a great amount of data on their long-term usage. However, these perceptions look set to change in the near future.

Recent reports like the Government’s 2015 Public Health England review of e-cigarettes showed that e-cigarettes can be an effective, safe way to quit or cut down on smoking tobacco.

Going from strength to strength

Over the years, as more manufacturers have created vape pens and other e-cigarettes, and as companies large and small have begun to create flavourful e-liquids for electric cigarette users to enjoy, the number of people enjoying vaping has risen.

Since 2012, the number of electronic cigarette users in the UK has increased from 700,000 to some 2.8 million people. It’s a figure that goes up every year, and which mainly comprises smokers and ex-smokers.

The UK even plays host to the largest ‘vaping festival’ in Europe, VapeFest, which has been running since 2010. Here, vaping aficionados and fans come together to vape, listen to music, and buy from top vendors.

With the great selection of electronic cigarette and e-liquid makers available around the world, and an increasing number of people using e-cigarettes, the future for vaping looks bright.