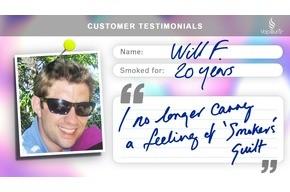 I found out about Vapouriz Winter 2013. I was standing outside our office building ‘taking the air’ as usual when one of the other smokers in the building came over with an e-cig and informed us that his smoking days were over. I had recently made the decision that, after nearly 20 years of smoking it was probably time to give it up so asked him what he thought of them and where he got his from. The answer was they are great and to go see Vapouriz as they would walk me through the options/types available. A few days later I spent a very happy hour in the Vapouriz office trying out flavours and learning how to use the e-cig.

On December 30th right up until 23:59 I was a 20 (at least) a day smoker. Since 1st January 2013 I have been a committed non-smoker all thanks to my e-cig from Vapouriz. In, what is approaching a year, I have had two drags of a normal cigarette and unlike all previous attempts to quit both times I really did not like the real thing. Truly astounding as in the past I have always, when returning to cigarettes, felt like I have got my best friend back! This time I only wanted my e-cig

I regularly recommend you, and always will. Most of the smokers in my village have now become Vapouriz clients. My local take-away is now a stockist!

I never really suffered any visible impacts on my health when I was a smoker but I am reliably informed that I ‘look healthier’ now. I used to carry a feeling of guilt that I was a smoker when I thought about the potential impact it would have on my wife and children and it is nice not to have that any more. Additionally I save a lot of money a year which is no bad thing. This has been the easiest ‘quitting’ I have ever done and as someone who really does like smoking and all that it entails, that is quite an achievement.