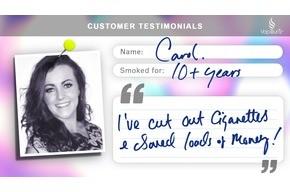 I first found out about Vapouriz about 2 and a half years ago, through a friend. We had been at the pub one December evening, and he offered me a disposable e-cig from Vapouriz. I found it had the same effect as a cigarette, and was a really pleasant replacement - especially at that time of the year, when no-one wants to go outside to smoke!

Since then, I continued using the disposable e-cig, and ordered my first Vapouriz Tank shortly after. I've been using them ever since! If asked to pick my favourite flavour, it would have to be Grape or Strawberry. They're really nice and sweet flavours, but aren't too strong. I also mix flavours, like Grape and Watermelon! However, there are just so many flavours to try, I might still change my mind! I would definitely recommend Vapouriz to my friends; many of my friends have already heard of, or purchase Vapouriz tanks too! My Vapouriz Tank has certainly helped me cut out cigarettes, and has helped me save loads of money too!