Great news! Filming for the second series of Poldark is now underway!

For anyone who’s been asleep for most of 2015; Poldark is a British drama television series first broadcast on BBC1 on 8 March 2015. The eight-part historical series is based on the first two Poldark novels by Winston Graham set in the late 18th century.

It sees Ross Poldark, the brooding main character portrayed by the handsome Aidan Turner, return to Cornwall to restart his tin mines after spending three years as a British army officer as a way to avoid his charges of smuggling, leaving behind his sweetheart Elizabeth.

Upon his return, having fought in the American War of Independence, he finds his father dead, his estate in ruins and Elizabeth engaged to his cousin Francis.

During filming this week on the beautiful Cornish coast its leading star, Aidan Turner, who was on shoot filming scenes for the popular BBC period drama, was seen vaping on an E-cigarette. 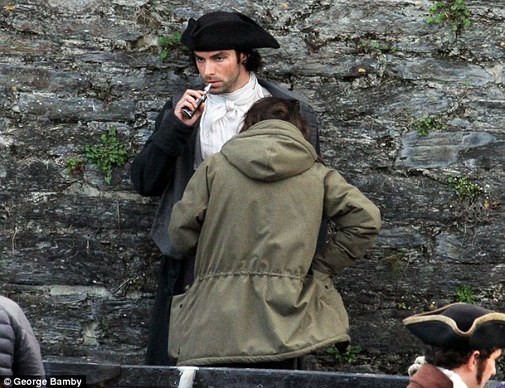 The 32-year-old, who reprised his role as Captain Ross Poldark, was adorned in traditional 18th-century costume as he joined co-star Luke Norris on the set.

His costume was complemented by a pair of black leather boots, a Tri-corner hat, and billowing white shirt – keeping his much famous abs under wraps – probably much to the disappointment of local fans who were seen lining the set in the hope of catching a glimpse of the man himself.

Aiden Turner is clearly a regular lover of e-cigarettes as he was seen using a black e-cigarette box mod – usually seen to be reserved for more experienced vapers (e-cigarette users) who have moved on from a traditional e-cigarette, such as the Vapouriz Fuse.

E-cigarette box mods are different as they are usually used with a dense dripper-style liquid which is made with a higher VG (Vegetable glycerine content), an ingredient which, once heated to a higher temperature creates big thick clouds.

It’s not clear what he was vaping in terms of flavour but we like to think it was something brooding and sexy like Pure Evil’s brand new ‘Lust’ flavour – perfectly matching Ross Poledarks sex appeal.